Welcome to the website of the Swiss-American Benedictine Congregation. Here you will find information about our monasteries and monks.
​Our History 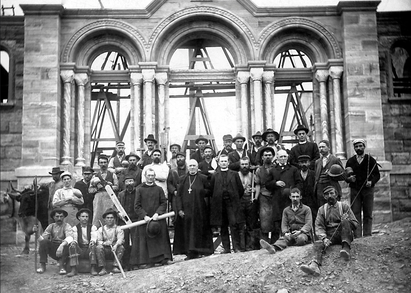 In 1881 the monasteries of St. Meinrad and Conception detached themselves from the Swiss Congregation of monks.  Pope Leo XIII in 1891 decreed that these two American abbeys should form a permanent congregation.  Under the leadership of Abbots Fintan Mundwiler of St. Meinrad and Frowin Conrad of Conception, Constitutions and Declarations were submitted to the Congregation of Propaganda Fide in March of 1894.  These first documents employed the commentary of the Rule of Benedict that was modeled by the recently-formed Beuronese Congregation.  Final approval was given by Rome for the revised norms in 1901.  The Constitutions and Declarations appeared in an accessible and written form in 1925, as Declarationes in Sacram Regulam et Constitutiones Congregationis.  These had been brought into conformity with the new Code of Canon Law of 1917 and were confirmed by Pope Pius XI in 1924. The primary aims of the Congregation as stipulated in the Declarations were seminary and educational work, along with pastoral and sacramental service.  During the first decades of the Congregation’s existence, the Swiss Abbeys of Einsiedeln and Engelberg served as a model for customaries and liturgical life.  The Congregation was placed under the patronage of the Immaculate Conception of the Blessed Virgin Mary.

There was a significant change in the complexion of the Congregation after Vatican Council II in the 1960s.  A series of General Chapters wrote a new Declaration, The Covenant of Peace.  A new Constitution was also written and revised by General Chapters during the 1970s and 1980s. The final text of the Constitution and Statutes of the Swiss-American Benedictine Congregation was approved and confirmed by Pope John Paul II in 1988.  For a brief time the Congregation’s name was changed to Federation of the Americas, in recognition of the many new foundations that had been made outside the United States in Canada and Latin America.  By the middle of the 1970s the Congregation reverted back to its name of the Swiss-American Congregation.

In the transition from the 20th to the 21st century the range of apostolic work and orientation of each community in the Congregation became increasingly diverse.  While most of the communities founded in the 19th century continued to promote seminary education and formation, the newer monastic communities reflected more varied manner of apostolic works and monastic practice.
Powered by